Paul and Joanna bought this run down partially converted property in 1990 and got to work stripping out as much as they could get away with whilst still living there.  Their eldest daughter Kate who was aged two at the time enjoyed all the renovations. 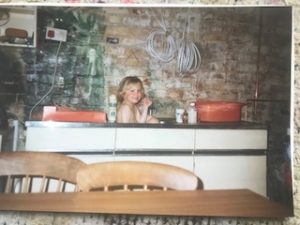 Kate’s bathtime in the sink in the kitchen

They lived pretty much in the kitchen whilst all this work was ongoing.  They did not have a bathroom or toilet for 8 months so virtually were camping inside. They were lucky to have friends who offered their showers.  A portaloo did the trick!

Finally, about 18 months later the place was habitable with heating and two bathrooms!

Over the years they spent time turning a field into a garden and building and repairing sheds, putting up greenhouses and generally doing much DIY.

Amongst this they had two more children Sophie and William.

In the year 2000 Paul and Joanna secured planning permission to convert their large shed into living accommodation.  When they stripped it out they unearthed a cobbled floor, large stable door and clear indications that this had been stabling for large working farm horses – Shires.  They also discovered wonderful honey-coloured beams throughout and so stunning they ensured that they were on full display enabling the main living area to have vaulted ceilings. 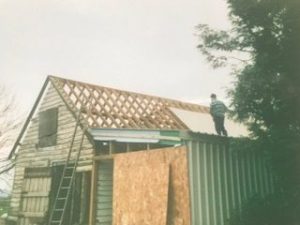 The cottage without its roof

Please fill out the information below to find out the availability on your chosen dates.

Still unsure? Contact us about booking your stay with us