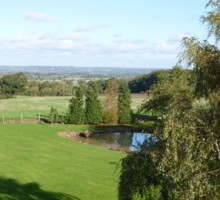 Warm and inviting bed and breakfast accommodation in a traditional Kentish Oast. Flexible booking and a wonderful full English breakfast. 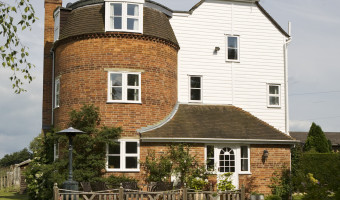 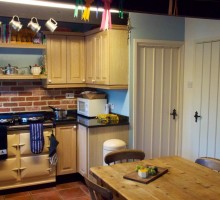 Set in the Garden of England where birds twitter in the mornings. Dodges Oast was built on the top of a hill and has panoramic views of the surrounding countryside to the North, East and West. 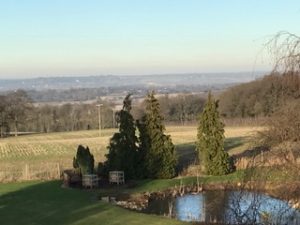 Here is a view from one of our bedroom windows in the B & B. It shows the far ridge of Coxheath before reaching our County town of Maidstone. (Note our bee hives)

We are in a peaceful rural location but only two miles to the main line railway station at Marden which is less than an hour to London, Charing Cross. Contact

This is an ideal place to relax, unwind and visit the Castles, gardens and famous houses that abound in the area. Only 1 hour from coastal towns such as Rye, Camber Sands, Hastings, Battle, Brighton and Eastbourne.

Visit Canterbury Cathedral dating back to 597AD famous for the murder of Thomas Beckett and Chaucer’s Canterbury Tales and many other fascinating tales.

Dodges Oast was built as a traditional Oast House to dry hops being in an area of which there were once an abundance of Hop farms. There are still some to be seen growing locally. Dodges Oast has historically only dried one season’s hops. It once was one of many buildings part of Dodges Farm but time has gradually eroded the size of this farm.

Our bed and breakfast rooms are newly refurbished and comprise of a double (East room) and twin bedroom (West room),  both with en-suite shower rooms. The rooms have dual aspect windows allowing guests to gaze out at the far reaching views of the countryside. As the views are to the North the sun does not impair the view. See prices 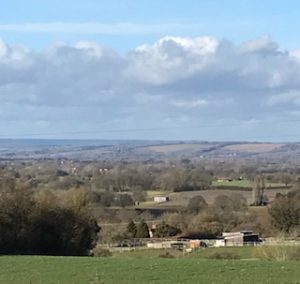 Please fill out the information below to find out the availability on your chosen dates.

Still unsure? Contact us about booking your stay with us